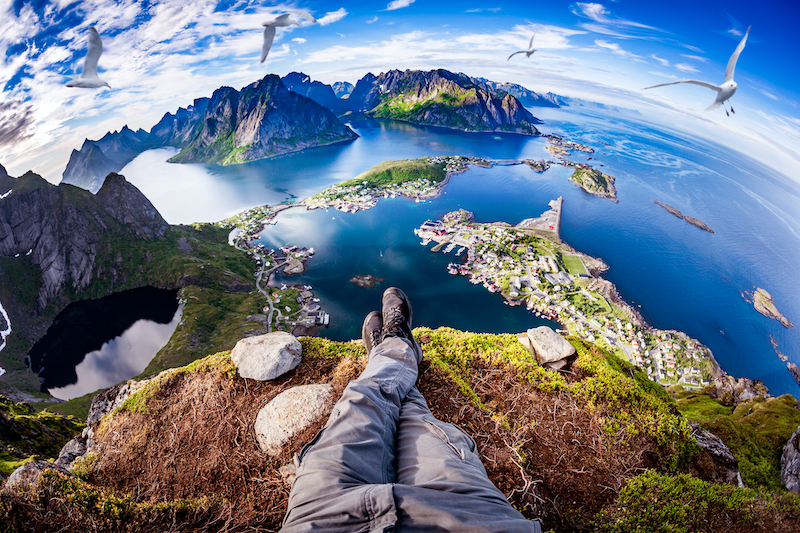 Fisheye lenses are an excellent tool when you want to get every part of the scene into the frame and allow for creative freedom that you can’t get with other lenses or even the human eye for that matter.

An image taken with a fisheye lens is not set in stone, as you have options to remove much of the fisheye effect with a little post-processing work.

If curvy isn’t the look you’re going for, you can remove its effect through your photo editor. Photoshop makes it straightforward, but it’s also possible in other graphics editors.

Fisheye lenses come in two different basic types determined by how they render the image in the frame.

A circular fisheye lens renders a circle in the center of the frame, while a full-frame/diagonal fisheye will make use of the full area of the image sensor and extend the image out 180 degrees to all four corners.

Best Fisheye Lenses for M43 Cameras and Every Budget

If you’re considering advancing your photography skills with your micro four-thirds camera, then a 4/3 fisheye lens could help you pursue exciting challenges. Here are a few of the best micro 4/3 fisheye lenses in 2020 that will help you do that.

This Samyang fisheye is a superb choice for your first lens. It’s very affordable, has a solid build quality, and is super easy to use, especially when manual focusing.

It’s hard to believe the quality of images you can achieve for such a cheap fisheye lens. It’s also capable of a reasonably decent minimum focusing distance for some nicely framed close-ups.

The Lumix G is the first fisheye lens made available for the micro four-thirds category and is relatively expensive if this is your first foray.

If you don’t need autofocus, then you might be better off with a cheaper option, but AF is hard to pass up when your photographing subjects that won’t sit still, as you’ll know if you’ve ever tried to photograph pets.

The lens features a much smaller minimum focusing distance than the cheaper models as well, so you will need to keep that in mind.

At the time of its release, Panasonic claimed it as the lightest and smallest lens of its type, which might still be true if you don’t count the Olympus 9mm f/8 listed below as a true lens.

An ED lens keeps chromatic aberration to a minimum with stable performance from close-up to infinity. Multi-coated lens elements help to minimize ghosting and flare for great optical performance that will keep most micro four-thirds fisheye lens enthusiasts happy.

This fisheye lens is Olympus’s second attempt at an affordable pancake body lens. The image quality is reasonable, but you don’t get as wide an image format as the other lenses. Understandable, given that the lens isn’t much more than a cap with a small wide-angle lens built-in.

It lacks just about every feature you would expect, including an AF mechanism, and electrical contacts. That last point means your camera won’t receive any EXIF data from the lens.

Is this lens a somewhat expensive body cap, or is it a modestly priced fisheye lens? One way to look at it is as an enhanced body cap that gives you options for having a bit of fun during your shoots when the mood strikes.

If you use it as a body cap, at least it won’t take up any room, or add any extra weight worth speaking about.

The M.Zuiko ED 8mm is a fisheye for the professionals that includes weatherproofing (if mounted on a similarly protected body), but it’s reasonably priced the professional moniker.

At 315 grams, 80mm long, and 60mm in diameter, the lens is a hefty beast, but you do get a lens capable of f/1.8, so it’s probably a reasonable tradeoff for most photographers.

Electrical contacts create a communication channel between the lens and the camera, so you will get all of your essential EXIF data. Even at this price range, you don’t get image stabilization as that is handled in-body on the camera, but you do get autofocus.

Take Your Pick of Fisheye Lenses for Micro Four-Thirds

If you demand exceptional results, or you’re a professional photographer, then your choice is clear, it’s the Olympus M.Zuiko ED 8mm f/1.8 PRO all the way.

For the rest, you will get pleasing optical performance out of both the Samyang 7.5mm f/3.5, so you can’t go wrong at these prices. The Samyang is a lot cheaper, but the lack of AF may be a deal-breaker for a lot of photographers.

If you’re not too serious about fisheye photography and don’t have much money to spend, but still want to dabble, then the Olympus 9mm f/8 is a good choice.

It’s an accessory that’s clearly aimed at the enthusiast level of the market. Even so, the image quality will still impress when it’s paired with the right camera.

Photography provides many different challenges for the aspiring photographer looking to improve their skillset. If you’ve been wondering what to try next, then it might be time to jump in and try your hand at fisheye photography.

With micro four-thirds manufacturers like Panasonic, Olympus, and other brands continuing to support the micro four-thirds range, it’s great to see that they are also coming to the party by developing the best fisheye lenses for micro four thirds.

Whether you’re serious about fisheye photography or having fun, there is now a range of prices to suit all types of budgets and skill levels.

https://youtu.be/e7i5B_5CMOI When you are looking for the best micro four thirds lenses for video, you will have a few different requirements than searching for a lens for still...