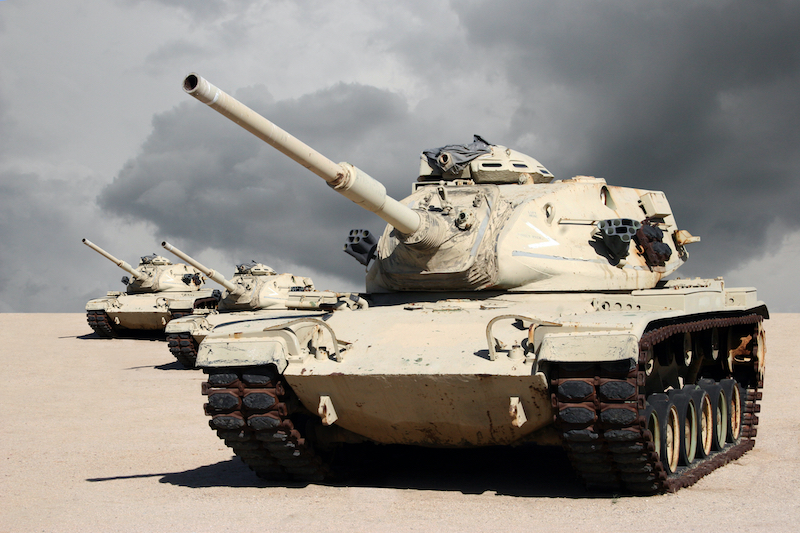 War is a tough but important subject for photography. Without the brave cameramen and women who venture into dangerous situations to capture scenes that no human should have to witness, many of us would remain oblivious to the horrors of the battlefield.

War photographers are an important breed of photographers. Capturing the moments of bravery and terror on the battlefield can change people’s lives, and in the case of the Vietnam war, images depicting its horrors can help bring the machines of war to a grinding halt.

Micro Four-Thirds War Photography – Are You and Your Camera up For the Challenge?

As you might expect, the typical battlefield is no place for delicate technology. When the goal is to capture the fleeting but poignant scenes of wartime, you need a fast, flexible camera that is easy to carry and use.

If you’re the type of spirited adventurer who aspires to capture humanity’s darker moments in print, then you will need a camera with a body that is also sturdy enough to handle the occasional body slam to the rocky ground.

One moment you might be dodging bullets, and the next, you’ll be chasing soldiers across the battlefield. Soldiers are highly trained, incredibly fit individuals, and when they move, they will not be waiting around for the photographer.

It takes a special kind of person to be a war photographer, and if you’ve got the grits to stomach it, then war photography can be a gratifying subject. The people back home will always appreciate your dedication in showing them the true face of wartime.

Why Use Micro Four Thirds as a War Camera

There are many features and characteristics inherent in the micro four-thirds range of cameras that make them ideally suited to life on the battlefield.

Size Matters on the Battlefield

As we mentioned previously, a small body that also packs in a ton of features is your best bet when you need to carry as much of your gear with you as you possibly can.

The latest micro four-thirds cameras have some incredibly sophisticated technology inside their relatively tiny frames.

A small camera means it will be light enough not to weigh you down when you’re racing to catch the action as it unfolds and won’t be so bulky and heavy that it gets in the way and be hard to manage in a tight spot.

You will be forced to take many of your shots from some very awkward angles, and a smaller camera body will create more opportunities for thought-provoking and moving images taken from a wide variety of positions.

Micro Four-Thirds Have a Full Range of  Lenses

You can take quite a few more lense with you when you’re carrying a more compact camera than the typical full-frame DSLR. The two times zoom factor of micro four-thirds lenses compared to full-frame means you can have plenty of options in a lot less space.

If you’ve been told to stay out of the way for safety, a range of good quality zoom lenses will give you opportunities to capture meaningful images from a distance.

A few good examples of quality lenses you should consider as part of your kit include:

Remember, the zoom factor is double because of the smaller sensor and cropping, so 300mm in a micro four-thirds gives you an equivalent of 600mm but contained in a much smaller lens.

The latest micro four-thirds cameras suitable for a war zone aren’t missing out on any features of their full-sized brethren, at least nothing that will impact your work or deny you any critical shots.

What is IBIS, and how Can It Help With Micro Four-Thirds War Photography

When you’re navigating a battlefield, you want to be traveling as light as possible. For most war photographers, this means they will be leaving the tripod at home. If the camera isn’t up to par, the photographer will rely on fast shutter speed, good lighting, and image stabilization.

In many cameras, the image stabilization might be fantastic for a wedding shoot, a handheld portrait, or photos of the family.  However,  in a war zone, you want every pixel to count, and your image stabilization will need to be the next level to achieve that.

Fortunately, the new Olympus E-M1 Mark III can deliver.  Regardless of the time of day or the level of light, the E-M1 Mark III is a solid handheld performer in all scenarios.

The IBIS in the Mark III is the latest technology from Olympus, and it has received a significant upgrade from previous iterations. It enables up to 7.5EV of shutter speed compensation across a 5-axis stabilized lens, which gives unprecedented accuracy and pixel-perfect precision when shooting in handheld mode.

A 121-point cross-type on-chip phase-detection AF gives you precise control over your focus points. You won’t have any problem keeping fast-moving infantry in sharp focus.

One thing that often plagues cameras in war zones is the amount of dust always in the air, but it won’t be a problem with the Mark III. The camera can vibrate the image sensor at 3,000RPM per minute.

All but the most stubborn dust particles will be able to hang on with that sort of abuse. Further adding to the robust lens and sensor cleaning capabilities, the camera is also manufactured with a dirt-repellant coating.

The lens may not have as many pixels as some of the competition, but a handheld mode capable of capturing an image from two slightly different angles to give you a composite shot of 50MP should ease the pain somewhat.

As for battery life, the OM-D E-M1 Mark III has been known to take over 3,000 shots from one charge. You can also charge the BLH-1 Lithium-ion battery via USB while it’s in the camera, so micro four-thirds war photographers have plenty of options to ensure they have power when they need it.

If you’ve been looking for a more compact camera suitable for war photography, then the micro four-thirds range can finally deliver all the features and accuracy you need in the Olympus OM-D E-M1 Mark III.