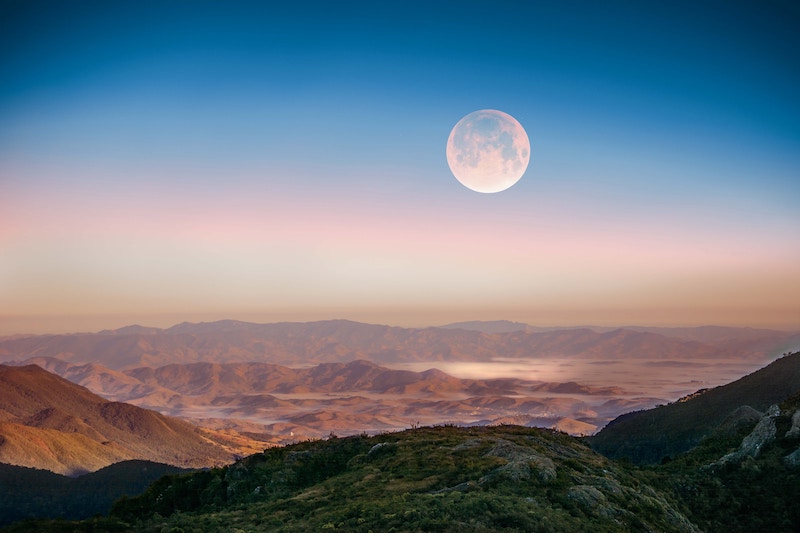 The moon is something that humankind has admired for ages, but few have come to understand fully. After all, it’s a bright light in the night sky that exists millions of miles away yet presents itself to us all every night.

Naturally, many photographers are drawn to capture the moon’s beauty in hopes of sharing its beauty with the people around them.

While you might think it’s as simple as pointing your camera at the sky and shooting, moon photography is more complicated than that.

Considering that a blue moon only occurs every few years (hence the popular phrase “once in a blue moon”), you’ll want to be well-prepared for the occasion so that you don’t miss out on the chance to capture the beauty of that rarely-occurring moment.

There are several camera options for you to consider using when capturing images of the blue moon. Still, arguably one of the best cameras to use for the occasion is the micro four-thirds system, or M43 for short.

If you already own an M43 system, you’re in luck. Micro four-thirds systems can produce some high-quality images of the moon as long as you know what you’re doing and how to use your camera to its greatest ability.

1. Do Your Homework – Learn the Moon.

Before you start taking photos of the moon (or anything, really), it helps to gain a better understanding of what it is and how it “works.”

As you might know, the moon emits no light itself but is simply a giant rock floating in space and caught in Earth’s gravitational field. The light we see from the moon is the rock being lit up by the sun.

As the moon orbits the Earth and the Earth orbits around the sun, the amount of reflection we see from that reflection on the moon changes.

This reflection is why the moon, as we see it, varies from being a full and bright moon to a crescent moon to no moon at all.

Remember that since the Earth is rotating in a counter-clockwise direction around the sun, the bright side of the moon we see always starts from the right edge and moves leftward as the Earth and moon rotate.

This rotation will help you as you plan for the right timing and lighting conditions for your blue moon photography.

It would help if you also kept in mind that, despite popular belief, a blue moon is not blue. By definition, a blue moon is defined as a second full moon in a calendar month (since full moons typically occur only once a month).

Don’t be mistaken: the blue moon is beautiful in its own right and still an excellent capture. Just don’t expect your images of the blue moon to be any different in color compared to your other moon photos.

If you want to capture high-quality images of the moon, you need to invest in high-quality gear. While most people think that having high-quality equipment means spending a lot of money, this doesn’t have to be the case.

Yes, full-frame DSLRs and APS-C sensor cameras can be quite expensive, but they are unnecessary. Instead, opt for a micro four-thirds camera system.

These cameras are capable, portable, durable, and boast many of the same features as higher-end cameras, but at a fraction of the price.

Since micro four-thirds cameras are mirrorless, your images will be sharper and clearer as well.

Aside from the camera itself, there are some other pieces of equipment you’ll need for blue moon photography. Some of the most crucial equipment to invest in are:

Instead of photographing the moon straight-on as most photographers do, try to plan out the image for a more interesting composition.

For example, try using reflections from bodies of water or shooting the moon from in between trees or mountains.

When you add more elements to the frame and arrange them creatively and appealingly, you’re more likely to capture images that impact and inspire. After all, we’ve all seen close-up photos of the moon head-on.

Due to the low-light environment and the intricacy of the moon, you’ll want to make sure that the blue moon is correctly exposed

you overexpose the moon, it’ll turn up as a solid bright circle. If you underexpose of the moon, you’ll lose out on the details of the moon’s many craters and mountains.

One great way to take shots of the moon at great exposure, try your camera’s bracketing feature.

This feature takes three snaps of the same image: the first at your determined exposure, the second at a lower exposure, and the third at a higher exposure.

You can then choose which photo has the best exposure when you review the images. Another great option is to combine the three pictures into an HDR photo, which allows you to cover a more dynamic range.

For you to take great shots of the blue moon, you’ll want to plan the event accordingly. Will conditions be best in the early morning or late at night

it going to be overcast, or will you have clear skies? From where will you shoot the moon?

These are all valid questions to ask yourself to be prepared and ready once the date and time comes.

One thing to note is that although it’s easier to photograph from home or near your home, you’ll most likely end up with the trouble of light pollution that comes from the lights of your city or town.

Try shooting from backcountry areas or in nature to get a clear image of the moon and all its detail and beauty.