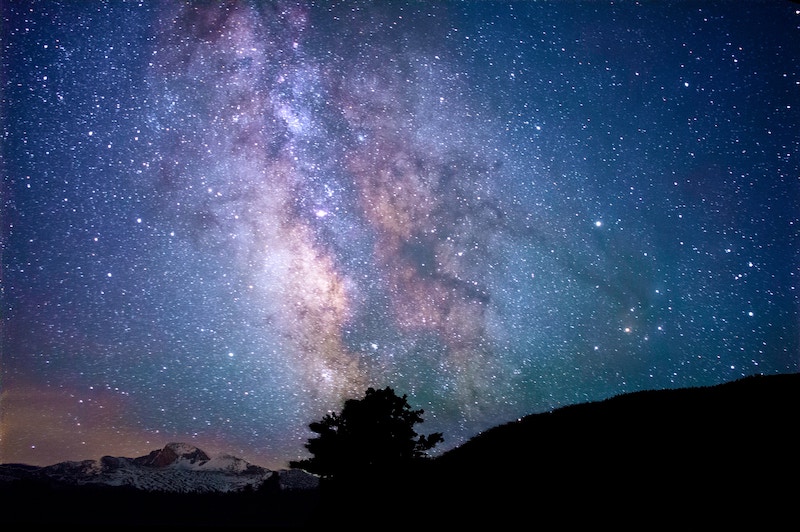 Shooting astrophotography with Micro Four Thirds cameras could be challenging.

The smaller sensor (compared to a Full Frame or APS-C) can leave more noise and reduce the quality and detail of the photo. But, is that be true in 2019?

First, let’s talk about taking photos of star trails, shooting the Milky Way and explain what camera gear and settings are required for astrophotography!

Have you ever been to a place outside the city and notice how bright the stars are?

To me, it happened a while ago, when I took a trip to Glacier National Park in North West Montana.

Montana is called “Big Sky Country,” and it feels like the sky is so much closer to you than any other place on earth (at least from the places I’ve been).

That night, the sky was so clear. You could see so many stars; they were countless!

This moment was when I started digging into astrophotography. I’ve seen numerous images online and on Instagram, but I’ve never thought about how it is possible to capture those magnificent images!

Then I questioned myself, what techniques and camera gear do I need to have to get such results?

Since the release of the Olympus OM-D E-M1X back in February 2019, significant improvements have been made in the micro four-thirds world.

The new flagship model E-M1X is the successor of the OM-D E-M1 Mark II and can take stunning night sky images combined with Pro lenses.

Below you will find a few specs of both cameras:

What makes the new Olympus OM-D E-M1X stand out is the unique image stabilization system combined with the 12-100mm M.Zuiko lens can go up to 7.5 stops!

In astrophotography though, you won’t necessarily need image stabilization. Here’s what you need to know about the settings.

When you want to take long-exposure shots of the night sky, you need to understand a simple rule:

Divide 500 by the focal length of your lens (in Full Frame terms)
The ISO should be between 1600 – 3200 depending on the location, lighting, etc.

Laith Stevens is sharing his astrophoto using the Olympus OMD E-M1 Mark II with the 7-14mm f/2.8 lens. As you can see here, he has captured stars and jet trails.

Wide-open at 7mm (14mm in a Full Frame body) and with a 10-sec exposure, the image looks noise-free at ISO 200. You might notice some noise at the top of the image, but that’s insignificant compared to the whole photo.

Of course, noise reduction can be applied in post-process – photo editing. Lightroom and Photoshop have a few unique features to eliminate noise and create a better quality image.

Here you can notice the clarity of the photo even if he is shooting with the widest aperture f/1.8 and the widest angle 8mm.

Not all lenses can produce a clear image corner to corner at the widest aperture. In this one, M.Zuiko delivers excellent sharpness at ISO 1600 and 20 sec of exposure.

Takuma Kimura shows off the newest Olympus OM-D E-M1X with one of the best photos and locations in the world for landscape photographers, i.e., Mt. Fuji in Japan.

The photographer uses the new OM-D E-M1X with the M.Zuiko 7-14mm f/2.8 and shoots at f/2.8 and the widest angle at 7mm. The critical part here is that he uses ISO 400 and leaves the shutter open for 60 whole seconds!

Despite the light pollution in the city, the image looks very clear and sharp without noticeable noise.

Astrophotography for other Micro 4/3 Cameras

To me, you don’t need the best camera gear to take photos at night. I understand astrophotography requires proper equipment, but anyone can take a decent photo if they put more effort and increase their photography skills.

This photo was taken with the Olympus OM-D E-M5 and M.Zuiko 9-18mm f4-5.6. It’s a decent camera with a 16MP image sensor. If you zoom in you will notice some noise, but that’s fine. Not every image has to be noise-free.

He also used the widest aperture and focal length at ISO 800 and 15-sec exposure.

The stars look pretty good. Despite the noise that occurs between the landscape and the night sky, the rest of the image is pretty clear and in good quality.

This setup costs a little less than US$700. Pretty amazing, isn’t it?

The more you can spend on camera gear, the better results you will have. That doesn’t mean you can’t have gobsmacking results with less expensive cameras and lenses.

The new Olympus OM-D E-M1X provides outstanding image quality but comes with a price. You will need to spend at least $US4000 to get a decent lens too.

Your second choice is the predecessor of Olympus OM-D E-M1 Mark II. At almost half of the price, you get the same megapixels and image quality.

It might not have the newest features of the E-M1X, but if you get a Pro lens, the difference in image quality will be minimal.

For those who don’t want to spend over US$1000 and need a cheaper option, the Olympus OM-D E-M10 Mark III and E-M5 Mark II are great choices.

Again, combined with a quality lens, you can take fantastic Astro images!

In particular, Olympus is pushing the limits for m43 photography, but Panasonic also is producing very desirable micro 4/3 gear, with a slant to video.

These camera makers are staying up-to-date with the rest of the camera brands like Sony, Canon, Nikon, and Fujifilm. Everyone specializes in something different.

We should also mention the high-quality lens lineup they have. If it weren’t for the lenses, then all cameras would be worthless.

If you’re looking to get into astrophotography and you want an interchangeable camera system with high built-quality, producing sharp images and outstanding support, Olympus is the brand you’re looking for to achieve this.

Make sure you know what you need, check your budget, and decide which model is the right for you.

Usually, depending on your budget, make sure you spend less on a camera body and more in lenses.

You can get far better images with the best lens and a previous model (i.e., Olympus OMD-M10 Mark II instead of Mark III) than get the latest camera body with a cheap lens.

However, if you have the money, go for it and buy the best camera and lens!